Still no solution to land dispute

Two groups of villagers representing more than 500 families locked in land dispute cases in multiple provinces once again rallied at the Ministry of Land Management and Ministry of Environment yesterday, appealing to authorities for a solution.

Ie Vanny, a Kandal representative, said yesterday that 292 families have been in a dispute with the Heng Development Company since 2005, when the company began clearing and confiscating 450 hectares of their farmland.

Mr Vanny said that a complaint was previously filed with provincial and district officials but a resolution was never provided.

“Please help us find justice and issue land titles in order to end our dispute,” he said. “We used to have land in the past but the company cleared our land and destroyed our crops – it affects our livelihoods.”

Ol Sok Yos, an official at the Land Management Ministry, met with the representatives.

After the meeting, the villagers said that the ministry told them to begin preparing documents for their case, prior to action being taken to solve the issues.

Seang Chanheng, owner of the Heng Development Company, could not be reached for comment yesterday but her company said on Facebook that she bought 4,000 hectares of land in the area between 1995 and 1997.

“Seang Chanheng would like to ask the authorities to open a public forum so that [Ms Chanheng] could ask the people accusing her of land-grabbing to reveal the facts in front of authorities,” the Facebook post said.

For the other land dispute case, representatives of 210 families in Koh Kong province joined the rally demanding compensation over their losses.

Tith Ten, a representative, said that the group has occupied the Land Management Ministry office for the last three days. 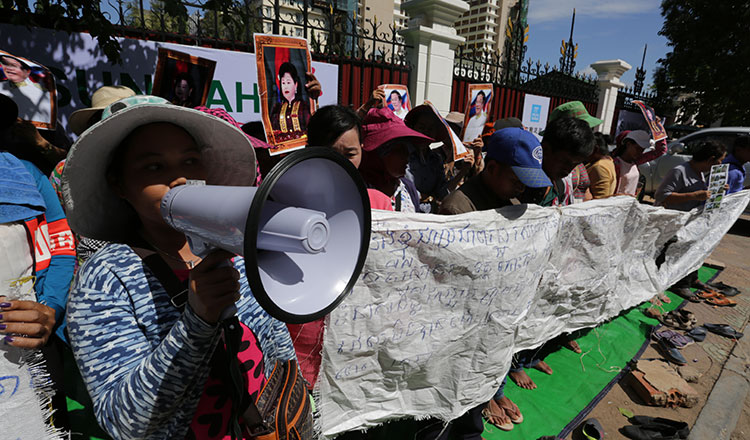 Ms Ten said that the rally took place in order to pressure the ministry to side with them against Union Development Group.

“I just met with Environment Minister Say Samal and the provincial governor and they said they will assign a working team in order to resolve the issues. They said they would assign the ministry working team to go to resolve the issue for people but they said that they’re reviewing documents first,” Ms Ten said. “So we don’t know what the solution would be but I hope there will be a solution because we’ve been affected by this for more than a decade.”