Each villager was sentenced to a year in prison, but after five months were suspended and with time served, each have two months left in jail.

“Judge Chea Sokheang has decided to sentence them to one year in prison each, but the villagers will only serve seven months,” Mr Lun said, adding that they will be free to leave prison in two months after accounting for time served.

“We cannot accept this decision because a government directive in 2002 deemed the land as protected forest,” he added. “So all ownerships was abrogated because it belongs to the state.”

Mr Lun noted that his clients will discuss appealing the verdict.

“We don’t agree with the verdict. I am a landowner,” Ms Touch said as she was escorted out of the courtroom. “Why don’t you arrest the real thief [Mr Tap]? The court is corrupt – there is no justice – this court official took money from somebody.”

Judge Sokheang could not be reached for comment yesterday. 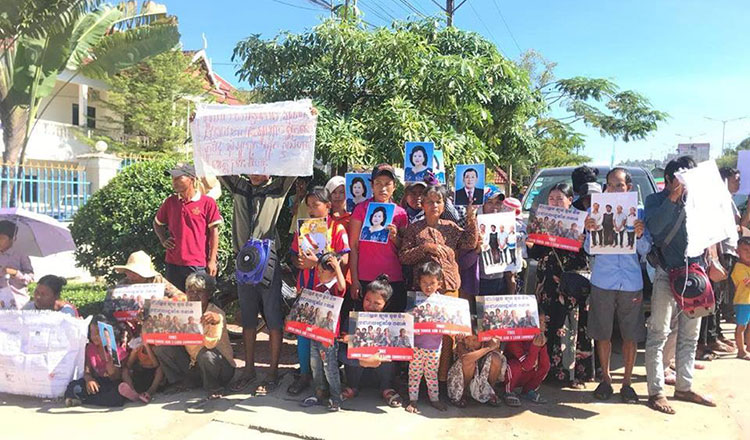 During the trial yesterday, some 300 supporters rallied outside holding portraits of Prime Minister Hun Sen and Bun Rany, demanding the immediate release of the four villagers.

The case began in May when provincial military police arrested six villagers in O’Tres commune for clearing Mr Tap’s land. Two were freed, while the other four were charged with destruction of property and jailed.

Right group Adhoc said the dispute between Mr Tap and villagers was over an 84-hectare area which is claimed by 54 households based on documents issued by local authorities.

Nhel Pheap, a Coalition of Cambodian Farmers Community official, said that he was disappointed with the verdict.

“It is very unjust that the land owners were imprisoned while the thief who grabbed their land is free,” Mr Pheap said.

You Veasna, a supporter of the convicted villagers, said the government should find a resolution to the land issue and find justice for those convicted.

“It’s an injustice. Today they decided to convict innocent people,” Mr Veasna said. “We’re waiting for a resolution and we demand the four be freed.”